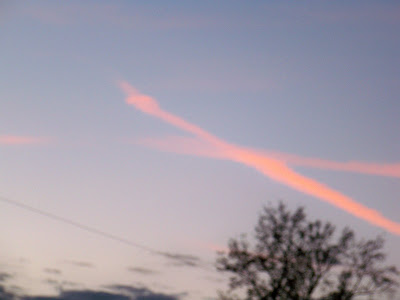 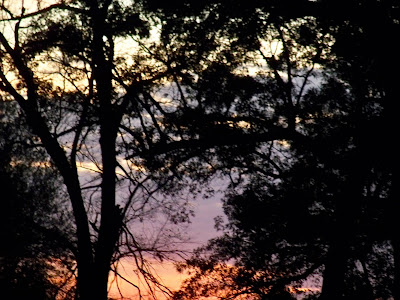 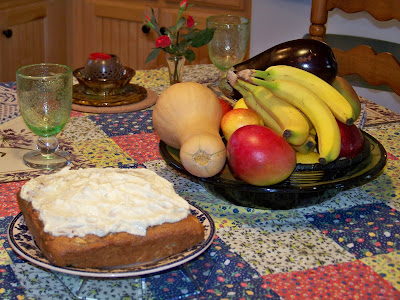 Last night as the sun was going down a friend called and said " something in the sky looks like a cross can you capture it with your camera"? Forgot about it until a minute ago when I was taking a picture of my simple apple cake. When I downloaded my pictures - there it was.

The cross in the sky and an awesome sunset ended the day yesterday.
A busy day filled with errands, thought I lost my credit card and found it on the floor board of my truck. Thankful heart !!
Calling for frost tonight - so 6 green tomatoes picked and put in the window. 7 green peppers to be chopped and go in freezer. A bowl full of the best turnip greens I have ever tasted were picked. This may be because I grew them. Half a dozen of small turnips were an addition to the greens for my simple evening meal plus a few small almost November roses.
A last minute thought - I have not baked in a week and I there has to be something homemade in the cottage. A simple apple cake that called for applesauce and I used some of the apples I had on hand - topped with cream cheese frosting - Pretty good....
Young school boy that helps me at times came after school. We put up the hose, shut vents under the house and raked leaves. I went to pay him and he would not take the money - said it was the last 2 hours of his community service for the boy scouts. I told him I did not feel right about not paying him. He looked me in the eye and said "there is no charge". So next week will have him return and finish on the leaves and this time I will pay him.
Posted by One Woman's Journey - a journal being written from Woodhaven - her cottage in the woods. at 6:36 PM

I was thinking today how I love this simple life...I baked chocolate chip bars, got locked out of the house (thankful for Shannon, who came and rescued me), but all in all I like retirement...
I would love those greens...yum!

I am always thinking I have lost my credit card and then find it either in my purse or the car. Your cake looks yummy. I love apple cake. One of my favorites. It is supposed to get in the 20s here tonight. Old man winter is just around the corner! Have a good weekend.

Beverly, you have worked so long and this is good for you. Winter is a mixture for me. Sometimes I can just relax and read and other times I am anxious to get out.
Have a good weekend - cooler this morning.
Judy, thanks for visiting. Cool this morning but not like your area. Have a good weekend.

Sounds like you are storing up for a long winter. I have not heard frost warnings here yet...but we are very close.

Cold night here. I hope it won't be cold for trick or treaters. What a nice boy...our neighbor boy got rid of our leaves last week, without our asking him. You have inspired me to make a one layer cake of some kind today...Have a nice weekend.
Balisha

Tabor and Balisha, thanks for visiting. Balisha the cake is pretty good and enough for me for several days. I like something homemade with my tea.
With the woods surrounding me - this morning you cannot even tell a leaf was raked. Just tidying around my walk. Leaves are being taken into the woods. Back where they belong :)

Warm, welcoming and delicious, and I LOVE that piece of patchwork on the table. It sets everything off so beautifully.
Your title is so true. Life is best at its simplest.

I stopped by your home today, just to pop in for a moment, as I had been to a shop nearby. I saw sweet Callie! I will call you when my order at the shop is in and will see if you are home then to visit. They said it might be 2 weeks.
Your yard looks lovely and peaceful.
You extra daughter.

Your applesauce cake looks so enticing that I wanted to lift it out of your photo and cut a slice.

It is still hot here. It was 86* yesterday and I think it will reach that today.

Marcia, thanks for visiting - I asked mother to make a small tablecloth for me - she did this.
She has been gone 11 years. So everything she made for me is extra special.
Amy, I am so sorry. I am here most of the time. Only leaves at this moment. If you had come a month ago - my gardens were still in a little bloom. Please come back - your other mom.
Darlene - thank you. If we lived near one another I would keep you in supply of baked goods. That cake is so simple, small and good.
I did not have apple sauce and chopped up some apples on hand :)
I never follow recipes..