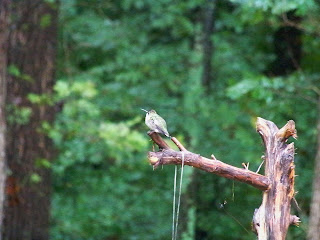 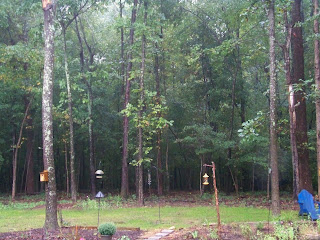 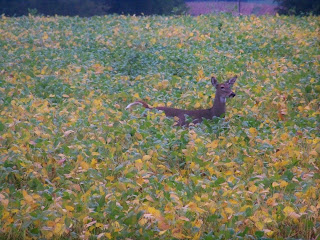 There has been no subject that came to mind for me to share about the last five days. Rain, rain and more rain and several times the thought came to mind "have I moved to a swamp?" It rained all night and up to an hour ago. Guess what - the sun is shining and looks like the rain has left for a number of days.

As I have viewed the towering trees I have felt like I am living at the edge of a rain forest. Every morning just before daybreak I open the door to my deck and begin my yoga. I visualize myself as those towering and strong rooted trees. It is beautiful and peaceful to look at and wish I was talented enough to capture the images that I view and as I walked in the rain under these lush green trees.
When the sun broke through the clouds the birds were out of the woods and at my feeders almost instantly. Was fun to watch at their happiness which is probably the same as mine. There was nonstop activity at the feeders and watching so many flying about put a smile on my face.
I have a vivid imagination!!!
I made a list of what I recognized - 4 bluebirds, a dozen gold finch, 6 robins, purple finches, 2 cardinals, nuthatch's by the dozen, 1 lone dove, 2 different species of wood peckers.
Some of the fattest humming birds at my feeders. Click on and enlarge the one image I captured.
I will have to invest in a camera where I can take better images of what I see. Also need new binoculars. The pair I have were purchased 40 years ago in St. Thomas.
I found someone to cut my grass and he will be returning whenever I need him. I have known this family for years and I am so pleased. It was like a gift to find him so quickly. My lawn looks so lush and green. To think there was no grass in June. Soybean field is beginning to turn yellow. Thought it was to soon for this since they were planted late in their season, then it might be the rain.
I am so pleased the Sun Is Shining.

Let us spend one day as deliberately as Nature, and not be thrown off the track by every nutshell and mosquito's wing that falls on the rails ... If the engine whistles, let it whistle till it is hoarse for its pains. If the bell rings, why should we run? ... I have always been regretting that I was not as wise as the day I was born.
Henry David Thoreau made this observation in the middle of the 19th century as he wrote at Walden Pond.
Entry from One Woman on a Sunny Saturday Afternoon!!!
Posted by One Woman's Journey - a journal being written from Woodhaven - her cottage in the woods. at 2:59 PM

The sun is shinning, Oh happy day! We had begun to mold, well not really, but my goodness this morning the ground wouldn't absorb anymore and the water was just sitting on top of the ground in front of the house and still it was raining hard and fast.
We also love to feed and watch the birds, I like how you have made the feeders part of the garden. We just hang ours in the trees.

I love the photo of the deer, chest deep in leaves!!

The sun is really out today...yea!

I love that shot of the deer. Very pretty. :)

Cloudhands, I am surrounded by tall - tall Polars - no branches to hang my feeders from. Happy day for another sunny day.
Kenju - the deer is in the soybean field in front of my home. My Jamie - yes mom is smiling.
So much moisture in the air.

The soybeans with green and gold leaves make the perfect background for the deer photo. It's a great picture as is the hummingbird actually being still. Rare to be able to capture them when their wings aren't going ninety miles an minute.

Darlene, the hummingbirds sit on the branches of the trees in the back of my home. I have never seen this before. Will be a dozen or more. They are all so fat and must be getting ready for a long trip!!! Interesting to see how long they hang around.
Suppose to be in the 40's in the morning in my area.

friends and family in atlanta are floating around their properties and hoping their houses don't float with them! the south has had a huge remedy recently to the old droughts of yesteryear.

glad you are now sitting in sunshine and hope it brings you golden light all week. enjoy those beautiful birds - i love to watch ours, too. they can be as entertaining as a movie.

so glad you found a substitute landscape helper while yours is ill. there is always something to do in the gardens, isn't there?

Sky, thank you for visiting.
It looks like the rain has stopped and now it is really cool. In the 40's this morning. From warm and rainy to real cool and windy.
But the sun sure looks good. Have a good day.