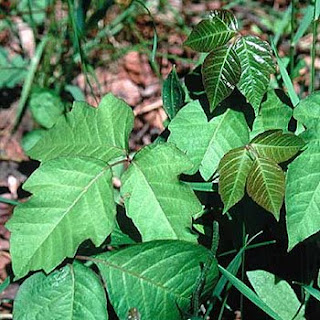 Oh my memories of Poison Ivy. For the years that I lived in the country - poison ivy was a several time a year occurrence. It would start out with a small rash. I never learned that I could not keep it from spreading. I would put items from the drugstore on it. Natural healing suggestions were used to no avail.
Within a few days or hours the rash would be spreading. So off to the doctor for a shot and pills. This always took care of it. I just did not like this process. Seemed like the pills made me feel like I was on some kind of high and could run a marathon.
I have not had poison ivy for several years now since living in city areas. Where do these thoughts come from? In the night the memory of poison ivy surfaced.
With thoughts progressing of a family home in the country - I know poison ivy is out there.
Also also with the ticks, chiggers and whatever else is out there to attack this One Woman.
I can remember a dear friend sharing a phrase with me that always worked for her. If she was still living I would call her for the correct words. Something like this "leaves of 4 you are fine, leaves of 3 let it be".
I think one of the worst cases I had was one winter. Could not figure out how this happened. Then in an enlightning moment I knew that it was on the wood I was burning. I had a habit of reaching under my shirt or top of my jeans and scratching myself. Anyway the rash appeared below waistline almost on my bottom. So you can guess how embarrassing it was for me when I went to the doctor and told him I need poison ivy medication. He asked to see the rash and I told him I was very familiar with this condition and just give me a shot and prescription for dose pack. He kept questioning me of the area. I finally shared with him and you can imagine telling him - in the dead of winter - that I had poison ivy on my back side.

Poison Ivy streaming vine of red wrapped around brown bark tree, warning of danger. Denise Girod
Posted by One Woman's Journey - a journal being written from Woodhaven - her cottage in the woods. at 11:58 AM

such a story makes me "itchy'...I have never had it. I must be a city girl...My ex had it once and it spread over his entire body. Ugh...
Miss hearing from you...I have been working so much...

Ooooooh, scatch, scratch, scratch. Poison ivy is so bad I have had it twice in my life, both times when pregnant and it covered every inch of my body. I have often wondered if the hormone changes made me vulnerable as I spend a lot of time near it when walking.
I think your new place is worth the risk!!
Peace to you!

Leaves of three, let it be.

If it's hairy, then it's scary

I didn't get poison ivy, but my older sister constantly got it. Once she got it after changing a flat tire - either off the tire or in the grass on the side of the road.

Oh yes, what a post for this One Woman on a rainy and cold day.
But it came to mind. Beverly, Cape Cod Kitty and Hughes ap Williams - thank you for commenting and checking in with me.

Oh I had a horrible experience with poison ivy one year. I was engaged in the unpleasant activity of burying one of our beloved kitties. It was a very hot summer day and I was wearing fairly loose shorts. Given that I was crying a little and sweating profusely I just wanted to get the job done and well and quickly as I could. The next day I realized my error of not paying enough attention. I had poison ivy rash inside my shorts and all over beneath my underwear. Fortunately, and I never understood why, that part of the rash faded fairly quickly. But I had welts on one arm that stood nearly an inch off the surface of my normal skin. Ugh. But one of my aunt's had an even worse experience. She was a kid out camping. She went to relieve herself in the woods and wiped with a big wad of poison ivy. I can't imagine what that must have been like.

Livia, thank you for visiting and sharing your stories about poison ivy. Hope we never get it again!!