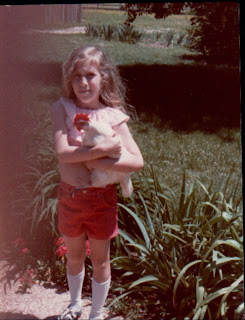 She was truly enjoying her dream life. The beautiful old farm home, gardening, animals and a swing on the porch. We had chickens. Enjoyed the fresh eggs and even had thought of how good they would taste. But we made pets of everything and no way could we eat them. Her young daughter had named every chicken. Looking through papers a list is dated 1980. Mary Ann, Gertrude, Henrieta, Andrew Sisters, Elizabeth, Lavina, Laverne, Shirley, Brenda and Eleanor. Every chicken has a description. Will not go into that.
Also found a list of chores and scale of pay. Feed chickens and dogs 10 cents, help in kitchen 10 cents, vacuum, dust and mop 10 cents, practice piano 15 cents, feed horse when necessary 10 cents, anything else 10 cents.
We had everything we wanted but some goats. We talked about it often. One day on the way to the store we were at the stop sign before pulling onto highway. To our amazement a big truck just went by and it was filled with goats. She pulled out behind it and another surprise as it stopped about a mile down the road at a small country store. She pulled up, parked and went inside to talk to the driver. A deal was made that he would follow her and put 4 goats in the barn. They were put in a stall and it was secured tightly. Oh she and her daughter were so excited, they had goats. Thoughts of putting them on a rope and letting them clear some of the wooded area.
The next morning right at dawn she excitedly went out to see her goats. They were gone.
Where did they go? Nothing was disturbed. A puzzle all through the years.
Sometimes a neighbor would tease her that some goats were seen several miles away, running in the fields. She was also told that someone had a barbecue and how delicious the goat was.
Two thoughts - they just got out and kept running. Another thought that the owner came back and took them. Hey maybe they were barbecued. Mystery still unsolved.
Posted by One Woman's Journey - a journal being written from Woodhaven - her cottage in the woods. at 3:00 PM

Surely someone saw the goats?! That is a mystery.

I swear when I read this I could not help but laugh. I think you must have bought the same goats we bought. My girls father went to the stockyards and bought a gooseneck trailer full of goats for our farm. He bought them home, opened the door on the trailer, they all ran out and went out of sight. We never saw any of them again. We looked all over that end of the county. It was like they just disappeared. Do you think we had the same goats? Weird???

kenju and Judy, Maybe this is the nature of goats to get loose and run off. I would like to have a couple on my country property to clear. But they would probably eat my car!!!

so funny...think you should let that be your only experience with goats. They probably would eat the car. lol