Cauliflower soup was made.  She is always changing recipes.  Instead of using Kale she used the remainder of her Collard Greens,  Instead of Tarragon which she did not have she used her Rosemary and Thyme.
No addition of white wine - none on hand.  This time she put ingredients in the blender.  Kind of bland even with garlic and onions and she put in some Tabasco.  Made it just right.

Then the chocolate sheet cake was made.  Planned on making next week and freezing half.  Like to keep something on hand in case some one comes by.   Usually she eats the whole thing herself.   Oh this is the best recipe she has been making for 40 years, a family favorite and so easy.

The project of sorting recipes, putting them in plastic sheets and in a binder - has begun.  A must as some favorites are beginning to be so stained and worn they are hard to read.
For many years the thought of making a cookbook for children.
There are just too many recipes and the binders will be available whenever they visit.

The snow started after lunch and the pickup windshield was so icy she could hardly see to drive to
the road for mail.

Her mother wore a big rain bonnet when it rained and she vowed she would never wear one of those things.
One of the items she picked up at her mother's home after her death was her rain bonnet.   The rain bonnet is something she wears at times like this.
At a younger age she would never have put this on - now it makes her smile....

Enough news  from One Woman who lives in a cottage at the edge of the woods.

Oh, I think I am going to experiment with a no till garden this year.   My garden is so small but supplies all she need and then some.   Sure would be nice not to hoe weeds.... 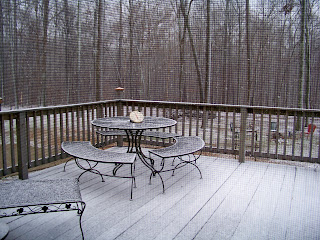 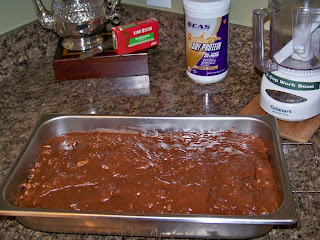 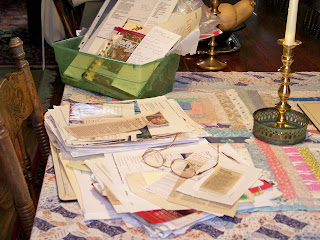 Posted by One Woman's Journey - a journal being written from Woodhaven - her cottage in the woods. at 5:30 AM

I know what you mean about things from loved ones who have passed on. They sure do become precious to you.

Lovely photos. I actually could be there...I think I smell chocolate.

I need some of that cake!!!

Your cake looks wonderful.We are having a bitter cold day today. We were just plowed out. I made pea soup yesterday and we will have some leftovers today. I do love the old stained recipe cards from my Mom and Grandma's kitchen. Some old favorite recipes just keep going through the family. My kids ask for them more than any others.
I like your idea of a no till garden. You'll have to tell more as the planting time comes.
Have a nice day...Balisha

Blustery and snowing here in Toronto. Think I'll make your Tuscany White Bean soup this weekend! My stepsons' father created a cookbook for each of them as they went off to university. It included well loved recipes along with various tips like what basics you need in the kitchen cupboard.Their present wives really love their zest for cooking!

Brr-r! I can almost feel your cold wind and snow! But ~ that cake would warm me up in a minute. You always make me feel like I'm there with you ~ seeing you driving in the snow, wearing your mother's rainbonnet, and sorting through the recipes. Very enjoyable!

Well, now I want to see the bonnet!

As we age, if we’re lucky, many of those small vanities that so worry us when we’re young just fall away. My guess is the bonnet is practical and keeps you dry.

Comfort is what matters. Your mother knew that.

maybe you will post the chocolate cake recipe or email it to me? wish we had the dusting....expecting ours saturday night or sunday. about to make a big pot of soup.

I like the image of what I'm guessing is your frosty back porch. Looks still and quiet -- while waiting out winter.

We got a little unexpected dusting her Wednesday night. Big beautiful flakes fell for an hour or so, I guess.

And as for the cake recipe -- I'm baking, if you're sharing.

I see you in the woods under that bonnet. Take good care of yourself!