For many years I have always had a dog or dogs.   I enjoyed them but they were always kept
outside.   In cold winter in the country a house of straw would be made for them and they were always on the porch.    Rarely would I let one inside.


Now little Callie rescued 6 years ago as a year old had a dog house on the screen porch
during the Winter.   Little by little I have been bringing her inside and at night she is in the
utility room with a small gate by the door so she does not wander.

I would read of those letting their dogs in their bedrooms and I would say "never" would
this one.   All of my children with their dogs let them have the run of the house.

Last trip to big city I bought another bed for Callie "for my bedroom" for the cold months.
Oh my she loves it.   I go to bed early and she is on her little bed and never moves until
I am up early in the morning. 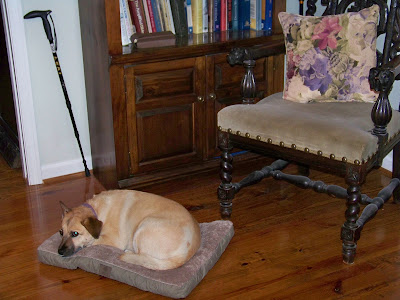 In the 50's early this morning with rain and have no heat.  Was going to turn it on for a short time
to take chill off of inside.   Called Service man and he  told me what to do on the phone
but still not happening.   No hurry but he will arrive sometime over the next few days.  I may be wrong but sense we will have an early really cold Winter here by the woods.   Oh, how I miss
my wood burning fireplaces and stoves of the past.  Gas logs to knock chill off but nothing
like a real fire burning...

Since building this cottage there has been constant problems with this unit.   Never before
in years past in other homes and I know that nothing is made like in the past, seems all
appliances are problems in a few years.
Posted by One Woman's Journey - a journal being written from Woodhaven - her cottage in the woods. at 6:43 AM

It sounds as if you and Callie are perfect companions. She obviously loves her new 'in the bedroom' bed and it must feel nice for you to have her presence near you.

Sandra, yes this is something new for me and she never moves during the night.
I do not feel well a lot lately and she watches me, never takes her eyes off of me.
Over the last months
find her attention "comforting."

Our last dog was not allowed in the bedroom because I was such a light sleeper and did not like his tags rattling during the night. But our dogs have had a run of the house. With our huge tick population, I am probably never getting a dog until and if we move. It is sad.

I think you will find that it is very comforting for you AND Callie to share the room at night.

Thanks to everyone for your response. Tabor, did not see a tick this year :)
and Judy, yes she is comforting. Chp Butter :)
Heat finally late yesterday, 2 sweaters and another button down over them,
beginning to feel chilled and so pleased to have heat as it as turned
quite chilly here by the woods.

Yeah heat! Such a wonderful feeling to have it on after not being able to during chilly weather. You and Callie can be cozy and enjoy your beautiful home. :-)

I am glad you have Callie with you. It is good that she watches you.

So, so, so happy for Callie and for you! Dogs belong in a house. They are social animals. Life is way too short to worry about dog's hair on furniture and pawprints on hardwood floors. Have a nice day!

so glad callie has made it into your heart and home! I know she is happy (and warm and will be healthier in winter weather)! nothing quite like the companionship and loyalty of a dog. I miss mine deeply and imagine one day we'll have another. who has that cute dog you had a while back that your grandson took - was that a permanent arrangement with your grandson? we have our heat on here and have for a month. chilly nights and some chilly days as well. had to have someone come out here RE natural gas a week or so ago. hope your service call is prompt.

Sky, she has always had my heart :)
Gavin had Bear up until a year ago. A German Shepherd does not need to be in the big city, secured and walked. Bear was becoming not easy to handle and a home
with land was found for him. He traveled a lot from college campus, Florida,
Washington and now is where he belongs...

I think it's a rebel thing with dogs. As children ours were kept in a freezing back shed and always sickened and died. Mine have always slept in bed when they were able, now my Ansa has to be confined downstairs and I can't tell you how much I miss her.

Love your Callie - so happy in her bed and your solitary blue bloom, lovely.

WWW, when I was growing up
no dogs in the house either.
My father past away, mother remarried
and that dog was treated better then I was
when growing up
Special treats on her birthday, always on furniture
and in bedroom at night.
Mom, talked to Penny like she was a child.
"I am going to the grocery" do you want to ride with me :)