Hopefully I Am Through

I thought all the trees that might be a problem,
like falling on my cottage
had been trimmed or cut down.

I have been looking at this tree every since
building and 3 years has gone by so quickly.
Tree  had a large section very close to this home.
and with winter arriving and possible ice on the
limbs or high winds a decision was made.
A sigh of relief it is done and pleased that just
a section of this tree was removed and not the
whole tree cut down.

Also  the other evening noticed large sections of bark in my drive
and after some inspection noticed
the upper part of the tree that holds my Woodhaven  sign
was dead. If the wind was strong
and anyone was walking  in this area it could be dangerous.
So part of this tree came down also.

The tree men arrived at 7:00 yesterday morning.
They had to climb the tree,  it was so high
and could not use the machine that had
a high boom on it.

They had spikes on their shoes that dug into the
bark of the tree and kind of scary watching them climb
so very high.  They had already cut the large section
in many pieces and lowered them with a rope
when I decided to take an image of the man in the tree.
Should have picked up camera sooner, wanted my son to
see his mom's latest project - but never thought of it. 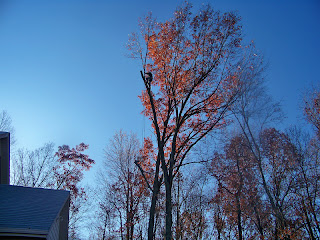 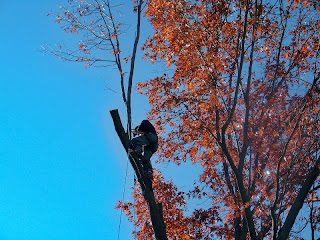 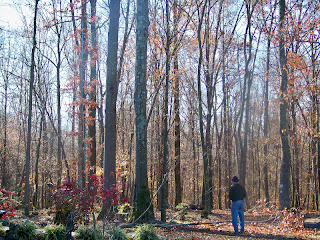 Even though they cleaned up before they left
there are still small limbs everywhere among my flower garden.

I love my home surrounded by nature -  one of the reasons
for moving back home was to leave this area in its natural state.
I wanted less work, less grooming, less expense and I have been surprised
that so far it has not happened.
I believe it is safe as I can make it close to my home and need to be
aware of  dead limbs on  trees as I walk in the woods.  The paths that have been made
make it easier to be aware of any high limbs on trees that are a danger.

Well aware a part of my personality is to continually groom
and hoping I am done for a while.
Posted by One Woman's Journey - a journal being written from Woodhaven - her cottage in the woods. at 12:05 AM

I've seen that same scene several times before. I always feared for those men....but they are the pros and are so careful.
I took a walk around the yard this morning after Mass and decided that the 2 little gardens that I didn't finish cleaning up..could just stay the way they are. I do have crocus bulbs to plant.
Have a nice day...looks like perfect weather from your pictures. Just look at that blue sky.
Balisha

Balisha, thanks for visiting.
Just returned from store. First time out of here in 5 days.
I sit at my computer and it seems like my words and fingers on the key board take over. At the moment I will be adding nothing else to my small gardens. Not feeling the best since going off of prednisone.
Take care and I understand where you are in this life process because I am at the same place :)

I can imagine how much better you feel having the offending limb from the tree gone, instead of worrying about it falling on your home.

You live in such a peaceful area. It is always a joy to see photos.

All growing things have to be pruned to make them grow better--even we have been pruned at times. I hate the expense of tree cutters, however!

We have a HUGE tree that is on the windy stormy side of our house. It is in the ravine and an environmental protected area, but it would crush our house if it fell. It would fall into our bedroom. We have been thinking about approaching the county in getting permission to cut it down. It would also cost us a small fortune in money. You now make me ponder.

FL, Judy and Tabor, thanks for visiting...

Your property is beautiful from every perspective, and you are a wise caretaker. Most of our ominous trees have been removed but you never know with the right gust of wind in the right place. There is so much to do on our property that I get discouraged - mostly took this year off from heavy yardwork.

Sharon, I am stopping unless something is dangerous.
Take care...

I can very much relate to your 'grooming' comment. I can always think of ways to continue to improve upon things and need to learn when to relax and let things just be.

PS - those men in trees are incredibly brave!

Important you feel safe and comfortable with your surrounding trees.

I've always been extremely reluctant to remove trees from around the house but had to do so on a couple of occasions in years past. Trees in the front in our parkway are cared for by our city. I see far too many dead branches elsewhere though they trimmed some on my tree when I notified them last year.