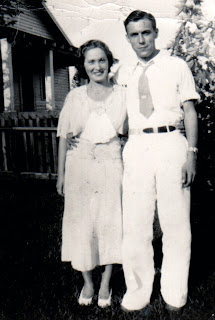 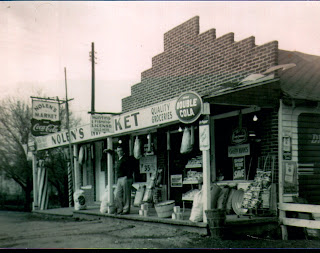 My father's birthday is today, June 13th, he would have been 98 years old. In his later years he had a dream. The dream was to have a small country grocery store. The dream became a reality after he retired and he and my mother moved back to their family roots in Tennessee from Michigan.

He took such joy in being the butcher in this small store. Was really good at this. When my children were growing up and I wanted a special cut of meat - he never disappointed me.
Seems the few times I purchase meat at this time I find the quality disappointing. I do not eat often but occasionally a steak craving arises.
My father's childhood was very difficult as his father passed away when he was twelve. There were five sisters in that household and a lot of the stories I remember hearing still bring a smile to my face.
My father died of a massive heart attack when my youngest was a little over one year old.
I can remember him coming in the door and she would run to him and he would put the hat he always wore - on her little head.
Memories arise this day and thoughts of how very much he would have enjoyed my children and grandchildren.
One Woman - Memories
Posted by One Woman's Journey - a journal being written from Woodhaven - her cottage in the woods. at 3:59 PM

Such a beautiful story with such loving memories and those photos are charming ...truly.

Yes, a wonderful story. I wish that my children had been able to know their great-grandmother. I was in total awe of her and I know they would have been too.

you were so very lucky to have a father who left you with pleasant memories and one you remember with love on his birthday. :)

Photographs always trigger memories, don't they? And then one things leads to another, and before you know where you are its lost in reverie time!

Sometimes the memories are not good, or hurt. But our lives, and how we have dealt with events, have made us what we are today. And we can be proud that we have got this far!

Sarah Lu and Kenju, thank you for the comments. Sky, to be honest there are memories concerning my father, I have accepted at this stage of life - a number of them -if I let them - want to leave a cloak of sadness. Gilly you are so on target with your statement. Thanks and blessings sent out to each of you my online friends.