Something I Rarely Do

Always a planner
but this morning something was done that was not planned.
I took off for the big city.
Many months had gone by, holidays past
and the sun was shining.

Stopped in one shop for them to adjust the
cane that I sometimes carry.  Thought their sale would be
in progress but was not.

Whole Foods, I like to visit a couple of times
a year, traffic was so bad so instead stopped at
Trader Joe's.
A Basil plant  was spotted among herb plants in pots (have missed this herb and because of frost I no longer have)  Eucalyptus soap and Crumpets were purchased.  Fond of Crumpets
not available in my small town.  Looked longingly at the bouquets of tulips, hyacinths,  roses and the mass of blooming plants - but did not weaken and purchase, but sure made me think Spring.

A stop at the special bakery for Tuscany Bread and their
tasty chocolate eclair. 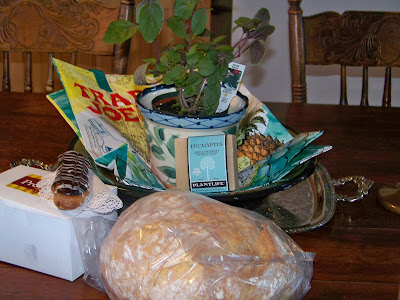 Traffic was heavy, time going by quickly and did not stop for lunch.   A nursery stop
on the return to the country and found my Apple tree.  Told them if they could put it
in my car I would buy it.   So it was loaded in back seat with window open and on towards
home I headed.

A different chili that was made yesterday was waiting to be warmed.  Instead of red beans you
use white beans and corn along with carrots, celery, onions, red and green peppers,  tomatoes and chili powder.
This along with Tuscany bread with melted cheese on it, my tea and ate the whole eclair with
a glass of milk was more satisfying then anything I could have had in the big city.

So good to be home.
I thought maybe I would be missed
but do not think anyone knew I was not home
"except Miss Callie."


Posted by One Woman's Journey - a journal being written from Woodhaven - her cottage in the woods. at 4:33 PM

Your day sounds like mine sometimes. It is hard for me to go into the "city" because I really have to stop at a mall on the outskirts and shop. The City itself is not really for shopping but touring. Your meal sounds like heaven, but I bet you were full.

Tabor, had many other stops I wanted to make - but too weary.
do not like traffic. Wanted to go into the big mall but no parking space. Good to be home...

Glad to read you had a pleasant albeit tiring day.

Sunshine does that ~ sends us on unplanned adventures. Your whirlwind day’s outing was a treat to read.

Miss Callie is keeper. You are a keeper.

Spur of the moment is totally good for us. We don't do it all the time, when you do it is special.

Love the plant, always love a plant. And an apple tree!
Bread....this is always too.

It is always good
to have a change
of pace.

I too can skip dinner in the city and just want to go home. Crowds weary me I avoid malls I like individual little bakeries and shops that are not stores.

We would have a good day together as long as you bought 2 eclairs for later.

Elsa Louise, so good to see your comment and hoping all is well.
Lynn,Sandy, Mel and WWW, thank you for visiting.
Needless to say I was very tired last night.

What a wonderful jaunt!! At least we have our Dear Furry Kids that miss us.

I like days like the one you had. I arrive back home feeling accomplished. Your bakery treats look delicious.

Thank you. Ups and downs, but generally well.

Lovely, as always, to land here and see the world through your eyes. Peaceful.

Sharon, Judy and Elsa Louise,
thanks for visiting..