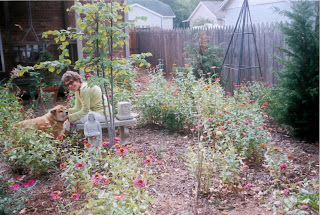 Don't ever stop at the Humane Society to just see kind of animals they have.

I was coming home from a special errand one fall day in 2001 down a road that I usually did not take. I could see the sign up ahead: "Humane Society," so I thought I will just stop and take a look. Why I did this I do not know to this day.

There she was, a tiny little blond dog. Immediately she came to the side of her cage and looked me in the eye. Guess that was it.

I asked "what is her story?"

They shared that a homeless dog that no one could catch had 8 puppies. This was the only one they could catch. I was told that they were going to put her to sleep the next day as her time for a new owner to arrive had expired.

That was all it took so I brought Sadie home with me.

At that time I had a home in the country 1,000 feet off of the road. I already had three other dogs. 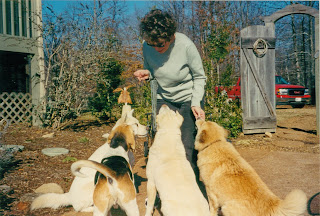 I am not a dog person. I have never had one in the house. But living in an isolated area and surrounded by woods it was comforting to me to see them lying in the drive and alerting me if anyone was on the way to the house.

When the time arrived for me to sell that home and move to the city I found a home for 3 of the dogs. Sadie seemed to be destined to stay with me. So she stays in my new backyard that is surrounded by a picket fence and alerts me if anyone if near.

I remember making a comment to my son that I had tried to find a home for her and really did not want a dog at my city home. He said "what does she do that is wrong." I truly felt ashamed and I replied "nothing." He went on to say that he thought it was meant to be that I have her.

So now 10 months in my new home, Sadie and I have settled in. I cannot imagine being here 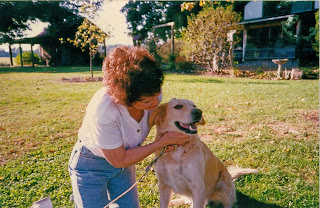 without her. She stays in the yard in the daytime and at night I put her on my screen porch.

I cannot imagine being here without Sadie.

Since I do not plan on writing about dogs again, I do not want to forget to mention Sam. I guess he is the dog I loved the most. Since he would look at me with adoring eyes and could be half a mile away and would come running when I called.

He arrived at a friend's home one day. She asked if I wanted him and I said "no." But after a visit at her home he won my heart.
Posted by One Woman's Journey - a journal being written from Woodhaven - her cottage in the woods. at 5:22 PM

Not a dog person, eh? I sure would hate to see how many you would have if you were...haha

:) yep, be careful when you stop at Humane Society :)

Nice to see your photos!

What a wonderful post...you have a huge heart! Sadie is a lucky dog to have you,